Hem Baby poo – what is normal? Green poop or slimy – what does that mean?

Baby poo – what is normal? Green poop or slimy – what does that mean? 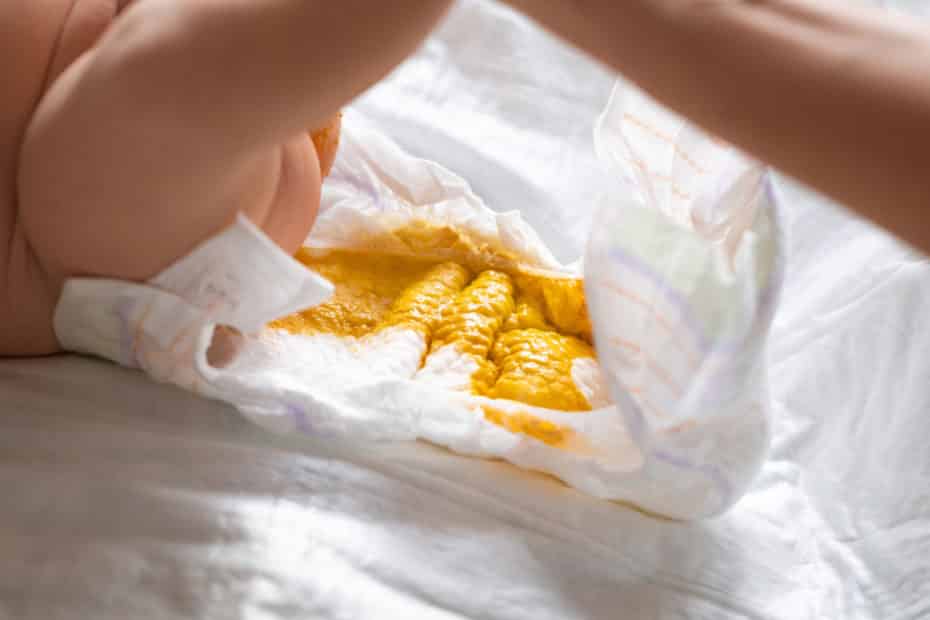 Facts and advice about baby poo. Written by pediatricians for parents. A baby’s poo always raises questions – Is green poo a sign of disease? Does a baby have to have yellow poo? Can an baby have slimy poo? Here you can learn everything you need to know about baby poo.

Baby poo in the womb

Babies should not poop in the womb. During pregnancy, the baby does not eat anything by mouth. A fetus forms almost no poo. The fetal liver, on the other hand, forms bile which is secreted into their intestine. When a baby swallows amniotic fluid, it is often absorbed into the blood stream via the intestines. Sometimes skin residues and such from the amniotic fluid are released into their intestines and mixed with the bile acid. These intestinal contents of a healthy fetus is called meconium, and is dark green-black and tar-like.

During the first month of life, infants who are solely breastfed, poop on average 5 times a day. But this varies enormously. 95% of all infants poop between 5 and 40 times a week. Half of all children poop less than four times a day in their first month of life. The other half, poop more frequently. Breastfed poo is curdy, yellow or green, grainy and often smells sour. Both yellow and green are perfectly normal colors for baby poo.

If the baby is breastfeeding and does not poop naturally, but only excretes poo after a lot of pushing and straining every three to four days, you should seek a pediatrician for investigation.

Children who drink formula tend to poo less often than those who are breastfed. I haven’t found any studies on how often they poo on average. But through experience, I found that they poo once a day or once every other day. Formula-fed baby’s poo smells more like adult poo and is often browner than breastfed poo but varies in color, shape and smell. It is not rare to see constipated infants in the children’s emergency room. In principle every baby receives formula, whether it’s the whole time or part time. We’ve found that a few babies who are given formula and are constipated, have been given formula that was not mixed in the right proportions. This can be dangerous, so always mix according to the instructions on the package!

An infant with constipation poops less often than every other day, often after much straining. Rectal stimulation can sometimes help get the poo out. The poo often comes out shaped into poo crusts or lumps. Use a Q-tip or rectal thermometer coated with vaseline or aquaphor and insert it 0.5cm (1/4 inch) into the rectum. Hold for 3 seconds and remove. If the constipation lasts several days, the baby begins to feel sick and perhaps begins vomiting and not eating properly. So it is important to help a constipated baby poop.

If your child had meconium discharged more than 24 hours after birth and has been constipated since birth, you should seek advice from a pediatrician and ask for an investigation for congenital bowel dysfunction just like for a breast-fed infant. But if the baby had meconium discharge on the first day of life, has pooped normally and after a few weeks or months starts to get constipated, you can begin by treating the baby first and see if it helps.

Start treating with Lactulose 5 ml daily and increase to 10 ml daily if necessary. Lactulose is available without a prescription at a pharmacy. Tell your doctor or nurse that you are giving Lactulose and that the baby has had constipation problems.

If the child’s stools changes and becomes looser, more watery, or is much more abundant and much greener than before, it is called diarrhea. Diarrhea in infants is usually due to stomach illness. If there is no blood in the baby poo, it is usually treated with fluid replacement as a viral stomach illness and not investigated further until after three weeks.

Read more about gastroenteritis and breastfeeding

In the case of residual diarrhea after three weeks, seek a pediatrician for examination. The most common cause of prolonged diarrhea in nursing infants is cow’s milk protein allergy.

Infants do not have lactose intolerance, as they must be able to break down lactose to drink breast milk or its substitute.

White or grey poo is dangerous

If the child produces gray-white poo, like putty, every time, go to the children’s emergency room and show their diaper. It needs to be investigated, and may be signs of biliary atresia, a rare congenital liver disease.

Blood in the poo

A little slimy poo in a baby is normal. Often the stool becomes more slimy in colds, and then it can also become greener. During a stomach illness, sometimes the poo can become really slimy in some phases. You never have to seek care simply because baby poo is slimy, instead it is the other symptoms that require control.

Seek the children’s emergency hospital when there is:

Seek the medical center or pediatrician’s office when there is:

Gastroenteritis or winter vomiting in children – infection and incubation period