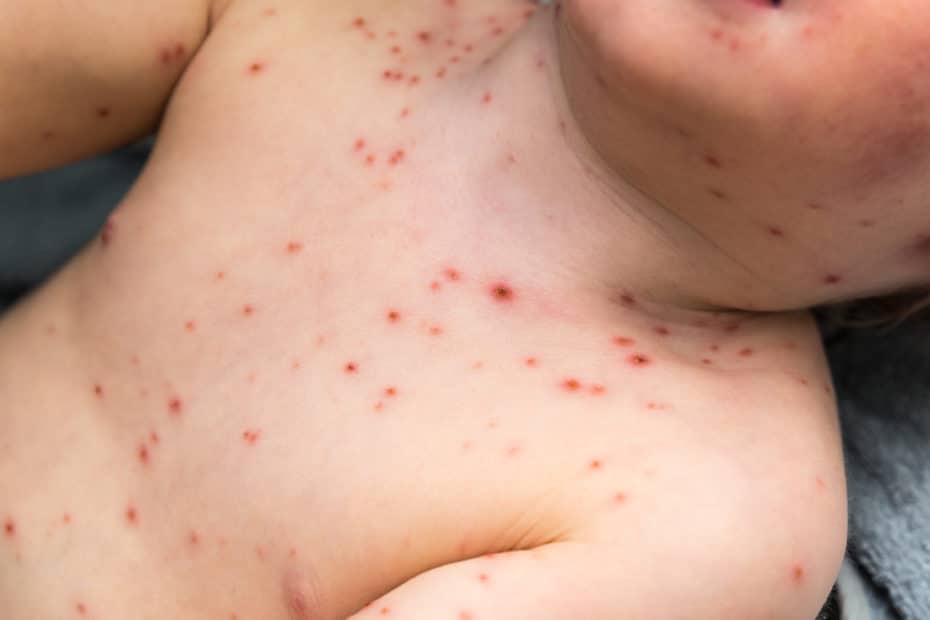 Chickenpox is a highly contagious viral disease. It manifests as fever and fluid-filled blisters that affects virtually all unvaccinated children in Sweden. The blisters itch and can be found all over the body. The incubation period for chickenpox is 2-3 weeks and it can be spread before the disease has broken out. Chickenpox often has a rather mild course, but sometimes there are complications.

How do I recognize chickenpox?

You can often tell when your child has been exposed to chickenpox infection. After 2-3 healthy weeks (incubation period) there comes the fever, cough and sometimes whiny or sore body. After one or two days, comes the rash. The first red dots will develop into fluid-filled blisters within a day. They sit one by one on a red base. The number of blisters differ between children. Some get it all over their body while others get only a few. Some people get so few that it doesn’t even show.

The more the child scratches, the more itchy the chickenpox gets. In addition, bacterial infections (similar to impetigo) are likely to occur and, when you scratch, you also increase the risk of scars forming.

We often prescribe antihistamine medications to children who have a lot of problems with their chickenpox. Experience does not help very much at all. Unfortunately.

A colleague tested the market’s entire range of medicines and non-medicines to try to ease the itchiness of chickenpox on their own children. She announced that the only thing that worked was a zinc spray. I haven’t seen any scientific studies on this, so take it for what it is.

She also suggested letting the child wear a soft onesie around the clock. Partly to hide the blisters (when it’s not visible, you scratch less), and partly to not have to pull fabric over them more often than necessary (as this irritates their blisters).

If your child has a lot of blisters in their mouth, see if you can give them icecream. Otherwise, try giving acetaminophen. However avoid ibuprofen in chickenpox, as there are suspicions that it may increase the risk of bacterial infections in the blisters. Try everything you can think of to get fluid into your child. But if you do not succeed, seek the children’s emergency room. Visit with another adult so that one adult can stay outside with the child while the other can enter the hospital and sign up. You will be shown to a room where you are not at risk of infecting other children.

Chickenpox virus is one of the most contagious viruses. The air in a room where a chickenpox disease has been, is considered contagious for a few hours afterwards.

Chickenpox is dangerous for children with poor immune systems

The chickenpox virus is pretty aggressive. A healthy well-fed child with a good immune system usually manages to keep the virus out of the brain and lungs. But a child with a compromised immune system (congenital or as a result of drug treatment) does not always manage to fight it off.

Children with compromised immune systems who have not had chickenpox should therefore be treated with antiviral medications, sometimes even when they have been exposed to infection!

If your child has a congenital immunodeficiency or is being treated with medicines that impair the immune system (for example high-dose cortisone, chemotherapy or many of the anti-inflammatory medications against childhood rheumatism, inflammatory bowel disease or after transplantation), make sure you know what to do if the child is exposed to chickenpox infection.

Guidelines for doctors regarding chickenpox in children with childhood rheumatism can be found here.

Vaccination is not recommended in children with compromised immune systems as the vaccine is a live attenuated vaccine. But if the immune system is impaired as a result of medication, it may be a good idea to vaccinate before giving the medication. If this is not possible, siblings can be vaccinated to protect the immunocompromised child in the family.

If the baby’s mother has had chickenpox, or is vaccinated, she will give antibodies to the baby at the end of pregnancy. These protect the baby’s first few months of life. This is great! Because chickenpox in newborns who haven’t been protected by their mother, can become really serious.

If you, as the pregnant woman, have not had chickenpox, and your child is exposed to the infection in the first few months of their life, you should seek medical care. Preferably speak to a pediatrician or infectious disease doctor. Or a general practitioner who is likely to talk to the above.

Guidelines for the care of newborns where moms has not had chickenpox can be found here.

There are also guidelines on chickenpox during pregnancy and chickenpox disease in newborns.

Do I dare go home after giving birth when the older sibling has chickenpox?

It’s a common question. Do I dare to go home with my newborn baby when the older sibling has chickenpox? Is the baby going to get any medication? If mom has had chickenpox or is vaccinated, the answer is: yes, go home, the baby doesn’t need medication. The baby is protected by the mom’s antibodies. If the baby gets infected by the sibling, they are usually fine. But seek a pediatrician or infection specialist if a newborn baby (up to three months of age) gets chickenpox.

Does hand washing help against the infection?

No, the infection is airborne. It can remain in the air for two hours after the chickenpox infected person has left. Therefore, it makes no sense to try to prevent the infection within the family.

It is more important to prevent spreading the infection to unknowns, as you don’t know if they have a compromised immune system. Children with chickenpox should not be brought into supermarkets; should not travel by bus or metro; and certainly should not go to the library; or to planned doctor’s appointments. When we receive children with chickenpox in the children’s emergency room, we do so in special isolation rooms. So tell staff that you suspect chickenpox while you’re outside the hospital, via intercom or similar.

It is contagious until the last blister has dried up, often 7-14 days after the disease has broken out. Preschools usually have rules that children should not attend until the blisters are dried up. But it is really pointless. Since the disease is contagious two days before the blisters break out, the infection is already present in the preschool group. But don’t try to send your child to preschool with undried chickenpox. You’ll just cause trouble.

What about chickenpox and shingles?

The two diseases of the same virus. The first time a person contracts the virus, they will have chickenpox with blisters all over the body. After that, some viruses survive in the nerve cells inside the body and kept in check by the immune system, hopefully for life. But if the immune system is weakened by medication, disease or increasing age, the chickenpox virus cannot always be kept in line. That’s when shingles comes along. But usually only from particular nerve cells. So the blisters then spread over a smaller part of the body.

When should I visit the children’s emergency room?

Read more about pneumonia in children – symptoms and treatment

4. If the child becomes withdrawn or has seizures. This could be chickenpox encephalitis that needs hospital treatment.

Remember: do not go into the children’s emergency room with your chickenpox-infected child until you have received the go-ahead from the staff. Expect children with compromised immune systems in the waiting room that will become terminally ill if exposed to chickenpox.

When should I attend a medical center?

1. If the child gets permanent, pus-filled blisters with yellowish-brown crusts. This could be a bacterial infection that needs antibiotics.

Call the medical center first! They have to arrange for your visit so that others will not be infected.

Infecting children with chickenpox on purpose is a bad idea

A reader asked me what I think about subjecting their children to chickenpox contamination on purpose by arranging a chickenpox party. I don’t like it! A parent’s job is to take care of their child and do what is in your power for the child to feel as good as possible. Exposing your child to the infection of a virus that basically always causes discomfort, and in rare cases causes serious illness, is not, for me, a well thought-out part of loving parenting.

If you want to control when your child is exposed to chickenpox, it is a much better idea to consider vaccination. Not because that is when the child will get chickenpox, but then at least you avoid the surprise effect.