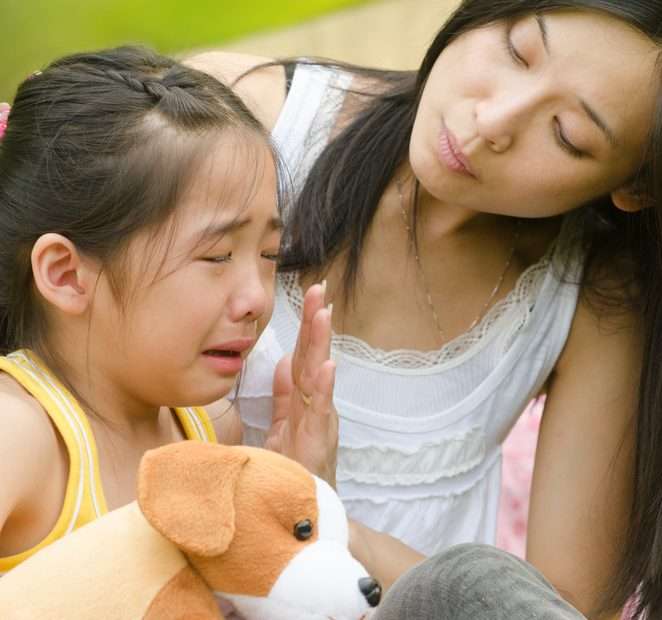 This is the second post in the series about children and death. In this post, we talk about how children grieve and how you can help. This post is also written by a priest, Katarina Tingström.

Talking to children about death – Part 1

As I wrote in the previous post, there was a time when it was thought that children do not grieve. As a consequence, parents did not tell their children when a family member died. The person simply disappeared from the child’s life.

When the adults cried and mourned without explaining or telling the child, the child will then resort to their own imagination, “what could possible have happened?” And you know what a child’s imagination is like! In the vast majority of cases, these fantasies were worse than the reality.

Today we know better. Children also have to grieve. They grieve based on the conditions they have, at the age they are at. Therefore their grief may look different from that of adults.

In addition to a child’s age, what also affects how children grieve is, among other things, their relationship to the person who died. The child matures faster if the child has experienced losses before. But one must not forget that the grief of those surrounding the child, also affects the child’s grief.

Max is 3 years old and has lost his grandfather in a car accident. For Max, it becomes obvious because grandfather used to pick Max up from kindergarten. Grandfather sometimes cooked, played and comforted Max. But grandfather is no longer there. Max becomes empty and cannot understand why grandfather no longer comes home to him. Since the concept of death is not definitive at Max’s age, he hopes and believes that Grandpa will return.

What makes Max sad is that he feels abandoned (see the previous post about how children view death). Grandpa has left him and Max cannot understand why. It makes Max angry. He gets angry at grandfather because grandfather has disappeared.

Max becomes angry and defiant. He does not want to cooperate. This may be Max’s way of mourning grandfather’s death. Sometimes adults do not always understand that the child is grieving. We often think that children grieving is in the form of crying and sadness.

While Max must try to understand why Grandpa is gone, he notices how the adults around him behave differently from how they usually are. Mom and Dad are crying. No one wants to play and no one has time for Max. This is also a change that Max must try to handle.

Today, it is usually said that children’s grief comes and goes. One minute they are playing, laughing and fooling around and the next minute they are clingy, sad and want to be comforted.

Just because a child behaves normally, does not mean that they do not grieve. It is common for them to bring their thoughts and feelings about death into play. An example could be that the child is playing a funeral or “bang, you are dead”.

The important thing is not to face the child’s grief with silence. You do not spare the child, or help them by keeping quiet about what has happened and by not talking about the person who has died.

What should I say?

Many parents ask this question. But it is not necessarily what a parent should say, it is more important to consider what the child wants to talk about and how the parent receives it.  It is important that you as a parent, show that you are listening to the child. The child may be unsure whether the parent is listening to the child’s thoughts, or whether it is dangerous to talk about death. So, it helps to have an attitude that shows that whatever the child brings to the table, mom or dad will listen and receive it.

If you as a parent answer, “No, we are not talking about that” or “Ugh, that’s so awful”, then the child will not dare to continue to talk about their experiences and thoughts. You have flagged this topic as dangerous, which inevitably stops the child from talking. But if you as a parent can show openness and curiosity about what the child is saying, the child will more likely express their thoughts. By actively listening, the parent shows that they are able to receive the conversation.

One day, in my own family, my children were playing with Lego at the dinner table. There were some old Lego men standing upright on the table. They represented our family. Then, at one point, my son put down a Lego man so that it lay down. That Lego man was the father of the family.

“What happened now?” asked the child’s father. “He is dead” , answered the son.

At that moment, to be able to talk about death with the children in the game, about how and why they think their father is dead, is to listen to their children and receive whatever they say. Dare to talk about it.

Is Max’s Grandpa in heaven?

When questions such as “where is grandpa now?” arise, you should try to answer as best you can. You do not have to worry about talking about heaven. It does not mean that you have to believe in any higher power. Heaven for a child is a place like a tropical holiday. It is easier to understand that “grandfather is with grandmother in heaven” than that “grandfather has ceased to exist”. In time, the child will decide for themselves whether there is a heaven or not, and/or what it is called.  That has to do with the existential brooding during adolescence.

When grief becomes too difficult to deal with in the family

These may be signs that the child needs help dealing with their grief.

If the child or teenager needs professional support, you can turn to a psychologist who has experience with children and grief. School health services may have a contact that you can use. In Stockholm, for example, The Randiga House is an association which you can contact. And if the death in the family is due to suicide, you can contact SPEC, the Swedish Association for Suicide Prevention and Survivor Support. In Dalarna, there is a collaboration between the county council, the Red Cross and the Church of Sweden called Barn och unga i sorg or ‘Children and Young people Experiencing Grief’.

Many congregations in the Church of Sweden have young priests with extensive experience talking about grief and death with other children and young people. You can also contact priests and imams in other denominations.

When a child begins to reach the age of 9 and older, they understand more about what it means when someone dies. At this age, they can begin to understand that the deceased will not return and can mourn them. Their grief also fluctuates. It comes and goes.

Sometimes it is difficult for children to confront the sad and painful reality of death. They can react by trying to deny it. They keep grief away by being extra happy and active, or showing that grief cannot reach them. Or they become challenging and fearless to show that they are not afraid of death at all.

A teenager can understand what has happened and also realizes that death can affect them. Göran Gyllenswärd, who is a psychologist and works with children and grief, thinks that there are four stages that a grieving teenager must go through.

For a period, the teenager goes back and forth between the stages and stays in them for a while. By mourning this way, they can continue their lives.

For older children and teenagers, friends are often an important support during grieving. With parents, children and teenagers can feel safe and live out the grief in the form of anger. Perhaps they can regress and make themselves small again. With friends they can seek comfort and have the existential conversations about what happens when you die – what is the meaning of life? Or talk about the emptiness.

If you get the chance as an adult to talk to your teenage, it is important to listen. To listen to their thoughts and feelings with openness. It can be scary for a teenager to get in touch with the pain that comes with grief. This is when they need a fixed point in life that stands firm.

If the teenager does not want to talk to mom or dad, there is no need to worry. As long as they are able to go about their day and have contact with their friends, they should be OK. Just keep an eye out.

The waves of sorrow are a sign of progress

Many parents describe their children’s grief like a wave. It comes and it goes. Sometimes it is deep valleys of despair and crying, other days it is much like before the death. As long as the waves are there, it’s a good sign. Grief moves slowly forward. But if the wave subsides and if it is only gray or black and without the waves, then the grief may have turned into a depression. That’s when you need to seek help.

Children grieve based on the conditions they have in their respective developmental phases. This means that sometimes the child needs to grieve again at the next development phase. Then the child may have been given more tools that they can use.

This can be complicated to detect especially if they displays unfamiliar signs a few years after the death. The child may start to show signs that something is wrong, for example by becoming more aggressive, starts lying, or has nightmares. You may not always think it could be related to the death that happened several years earlier. It is thought that the child’s grief was completed several years ago and it can therefore not come back.

If a child has lost a close relative or other person who has been important in the child’s life, it may be wise to remember this if problems arise in the future. It can be a grief that, for various reasons, is unprocessed. The child or teenager needs to talk about it in their new development phase based on the new conditions they have reached in their development.

When the parent also mourns

In most cases, it is not just the child who mourns in the family. The parents can also carry a deep sadness and sometimes it can become overwhelming. For the sake of the child, it is best to seek help for your grief yourself; in order to be a safe point for your child.

You should also not be afraid to invite friends and relatives over as a support for the child. They are not as affected by the grief and usually want to be able to help. And the child feels comforted that there are other safe adults in their lives when life has changed.

previousFlu (influenza) vaccine during pregnancy – pros and cons
nextChest pain in children – is it the heart?