Hem How vaccines provide immunity by stimulating the immune system 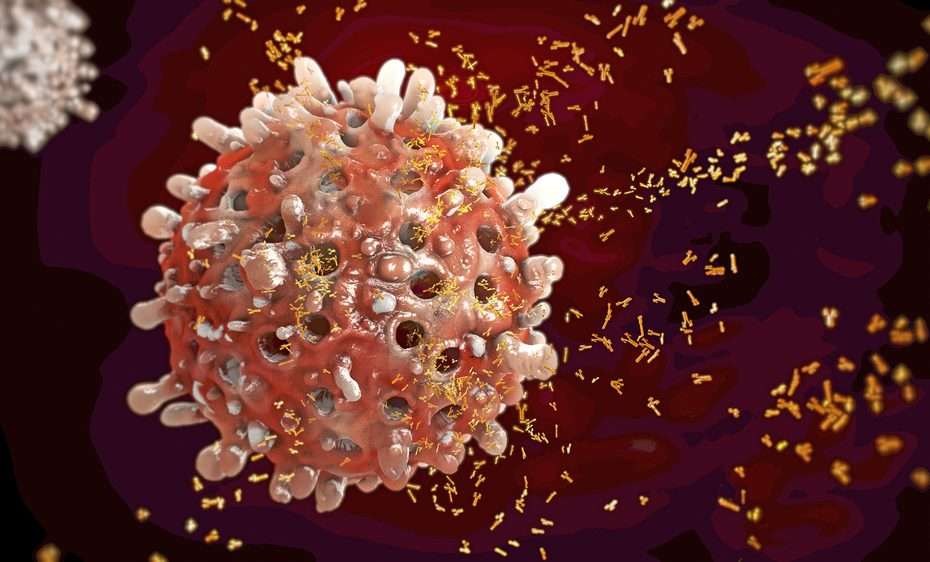 The two parts of the immune system

The key players of the adaptive immune system are T cells and B cells. They are both white blood cells that have recognition molecules on their surface. Random gene combination produces an enormous number of different T cells and B cells. Lymphocytes can recognize any microstructure. Without regulation, they could trigger a massive immune response to any microstructure.

The body has a system for sorting out lymphocytes that recognize parts of their own body. After that, the body retains lots of T cells and B cells that can react to things that are not their own body. These cells then settle and rest and wait until needed.

Interaction between the innate and the adaptive immune system

When the cells of the innate immune system present a microorganism to T cells, the T cells react. The T cells that recognize this intruder form several kinds of specialized T cells. Each cell divides again and again until there are a large number of T cells specific to this particular intruder. Some T cells become T-helper cells that help the B cells start with their response. Others become T-killer cells that can kill cells infected by viruses.

The B cells that recognize intruders and become activated by T-helpers that recognize the same intruder, begin to divide powerfully. The task of the B cells is to produce antibodies. Antibodies are small proteins that attach to the surface of bacteria and show other parts of the immune system that it is time to destroy the bacteria.

When the bacteria or virus is neutralized, most specific T cells and B cells die, but not all of them. Some of them remain, rest, but are on guard. Some B cells continue to produce antibodies. The next time we encounter the same intruder, the immune system is already prepared. Without even noticing that we’re getting sick, the virus or the bacteria is incapacitated.

Vaccination – strengthening of the immune system in a controlled way

When we give vaccines, we inject (or drink or inhale, but usually inject) whole or parts of microorganisms into the body. Lymphocytes learn to recognize and incapacitate the microorganism, so that they are prepared to fight the next time we are exposed. We activate the immune system and teach it to recognize certain intruders without us getting sick ourselves!

Because the vaccine does not contain the common viruses or bacteria. Most of the vaccines contain parts of bacteria or bacterial toxins or viruses that completely lack the ability to make us sick. Some contain live, attenuated viruses or bacteria. These do not have the ability to make people with well-functioning immune systems sick. However, people with severe innate immunodeficiency diseases or immunodeficiency due to heavy cancer treatments, can get sick from these weakened viruses.

The vaccines against measles, mumps and rubella, rotavirus and tuberculosis are live vaccines. The chickenpox vaccine, which is not part of the Swedish National Immunization Program, is also a live vaccine.

Read about the rotavirus vaccine

The vaccines given at three and five months of age as part of the Swedish National Immunization Program, are not live. They consist of bacterial or viral parts or modified toxins, which have no possibility of causing infection whatsoever. This is very important. As we have not detected which children have serious immune deficiencies at three months of age, it would be dangerous to give them live vaccines. TBE vaccines, HPV vaccines and the influenza vaccines are also inactivated vaccines.

Read more about the TBE vaccine

Read more about the influenza vaccine for children

In fact, vaccines are actually a shortcut to building up an active immune system. It’s a way of training the immune system. The immune system works together with the vaccine. Vaccines do not (excluding BCG vaccine and MMR vaccine for children with severe immune defects) cause severe disease, unlike the “original viruses” and the “original bacteria” we vaccinate against. They risk causing severe illness, that’s why we make the effort (and cost) to vaccinate.

Can you strengthen the immune system in other ways?

The web and bookstores are overflowing with tips on how to strengthen your immune system, with everything from the right food, exercise, mindfulness and yoga. There is no scientific support that any of this will boost the immune system. It is also quite unreasonable. The gene variants that may have led to the immune system shut down by stress and lack of mindfulness, would probably not have made it successfully through evolution. On the contrary, the immune system is a robust system that is prioritized by the body, regardless of whether we adjust our lifestyles.

How do vaccinations work? Herd immunity and the spread of infections