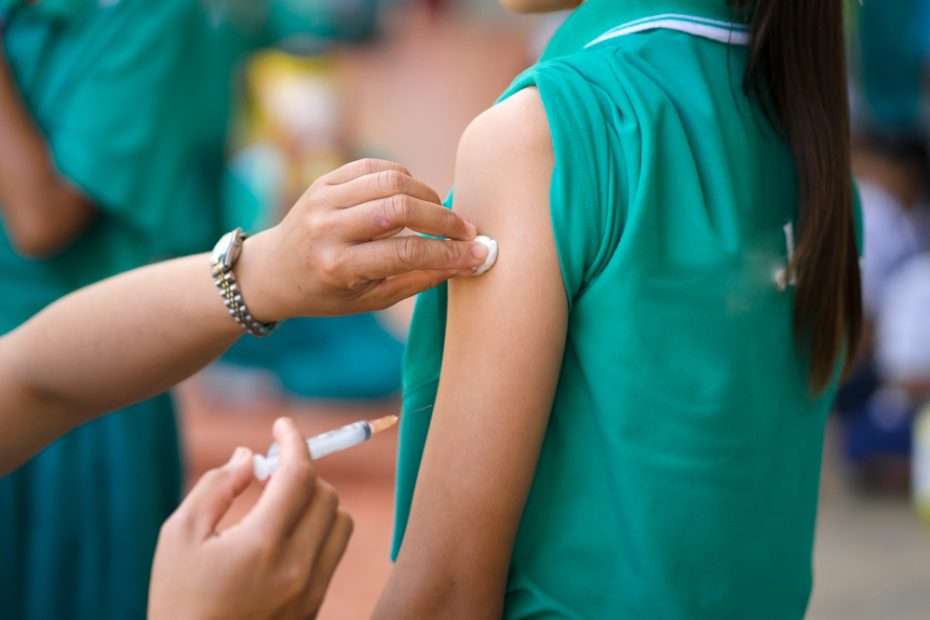 HPV (human papillomavirus) vaccine is a vaccine which prevents most types of HPV that cause HPV-related cancers and diseases in men and women. HPV is transmitted by direct contact. Some HPV types cause plantar warts, other types can cause genital warts and some can cause cancer.

Cervical cancer often develops slowly after an HPV infection, and rarely produces symptoms until later in the process. If cervical cancer causes symptoms, it is often bleeding after sex. If you’re a woman experiencing bleeding after sex, see a gynecologist immediately! (The bleeding could be caused by a ruptured vessel, or a benign hemorrhage, but it must be examined by the gynecologist!) This applies even if you are pregnant.

Cervical cancer grows slowly and does not produce symptoms. But it can be detected by sampling, and treated before it spreads. Therefore, pap smear screenings are done in many populations with well-developed health care. This is why women are called every three years for pap smear testing, or more often if you have previously had cell changes.

Pap smears can detect the precursors to cancer, or cancer that sits on the cervix but does not spread. These pre-cancerous cells can be removed with a simple operation called cervical conization. This is where one removes a wedge of the cervix but leaves most of it behind. Most women who have undergone a cervical conization, can then become pregnant and carry the baby to full term. Some, however, suffer from weakened cervix and repeated late miscarriages or premature deliveries.

Take care of yourself and your body, and attend your pap smear checks! If you have lost count and fallen out of the calling system, make an appointment with a midwife when convenient. You’d rather have too many pap smears than one too little.

Every year 20,000 Swedish women are notified of abnormal cell changes, and 8,000 are treated for this after further investigation. Worldwide, more than 500,000 women suffer from cervical cancer and 260,000 women die.

There are more than 100 different known types of the HPV. Some of them cause warts, some cause cancer. Types 16 and 18 cause about 70% of all cervical cancers in Sweden and HPV types 6 and 11 cause the vast majority of condyloma or genital warts.

Human papillomavirus is transmitted by direct contact. The virus type that causes hand and foot warts are contagious if the person who has the warts touches someone else. Fortunately, HPV that causes warts on the hands and feet (also known as plantar warts) do not produce cancer. So you don’t get cancer from visiting someone with warts. Win!

The vaccine is most effective if given before sexual debut

HPV vaccines are more effective when both doses are given before sexual debut, at a group level. There is a certain effect if given later, after puberty. But the longer you wait, the more people have had time to become infected with HPV and therefore the lower the effect. The vaccine does not seem to protect at all, or at least not very well, if you are already infected with the type of HPV you are vaccinating against.

Two doses of Gardasil vaccine is sufficient for 9-14 year olds, however three doses are needed in older people.

Currently, Gardasil is included in the Swedish National Immunization Program for 12-year-old girls and there is a proposal to vaccinate boys as well.

Read more about the proposal to vaccinate boys here.

Cervarix protects against HPV 16 and 18

The HPV vaccine Cervarix protects against HPV types 16 and 18, i.e. the types that cause seven out of ten cases of cervical cancer in Sweden. There are no vaccines against the HPV types that cause the rest of cervical cancer cases. This is why it is really important to take care of your body by, as a woman, going to the pap smear tests. These tests will enable us to detect and remove the precancerous cells.

The HPV vaccine Gardasil protects against HPV types 16 and 18, just like Cervarix, but also against HPV 6 and 11, which causes genital warts. In a Swedish study published in 2013, Gardasil protected 93% of people who were vaccinated before the age of 14 against genital warts. However, it only protected 76% in those who were vaccinated before the age of 20. Just like Cervarix, Gardasil only protects against seven out of ten cases of cervical cancer, at most. So, even if you are vaccinated with Gardasil, it is really important to take care of your body by going to pap smear tests regularly!

A new Gardasil, Gardasil 9, has recently been produced to protect against even more types of cancer-causing HPV. It is not yet part of the Swedish National Immunization Program, where it has not yet made its way into the vaccine procurement process. For those who vaccinate outside of the program, or their son at their own expense, ask for Gardasil 9.

What does HPV vaccine consist of?

Learn more about how vaccines work in this post.

Do vaccines protect against cancer?

Because it takes so long to develop cancer after HPV infection, the first studies on HPV vaccines have investigated whether they protect against cancer, CIN 2 and CIN 3. After three years, Gardasil protected against HPV 16- and 18- caused CIN 2 and CIN 3 in virtually all vaccinated women who did not have HPV 16 and 18 before being vaccinated. Even after ten years, most seem to be protected.

However, it takes 20 years on average to develop the cancer. The vaccines were approved in 2006 and 2007 respectively. So, whether they protect against cervical cancer will not be established until the end of the 2020s. Only then will enough people be vaccinated, and enough time has passed, for us to be able to conclude for certain whether the vaccine protects against cervical cancer caused by HPV 16 and 18. However, based on the results that exist now, the vaccines seem to provide protection.

What are the side effects of the vaccines?

In one or two out of ten vaccinated, there is redness and swelling around the injection site. Fever and transient pain in the body also occur. No serious side effects are known.

In Denmark, there was a great debate about POTS (postural orthostatic tachycardia syndrome) a kind of fainting, and CPRS (complex regional pain syndrome). These had occurred in a number of young women who had also received vaccination against HPV. A large scientific examination showed that there was no causal relationship between the vaccination and these syndromes.

Sources: WHO position paper on HPV vaccination, Public Health Agency information on HPV vaccine and The National Board of Health and Welfare’s cause of death statistics database.

All children’s emergency services’ posts about vaccinations can be found here.

previousTBE vaccine (tick-borne encephalitis vaccine) and protection against ticks for babies and children
nextWhat is an allergy? Read about the immune response