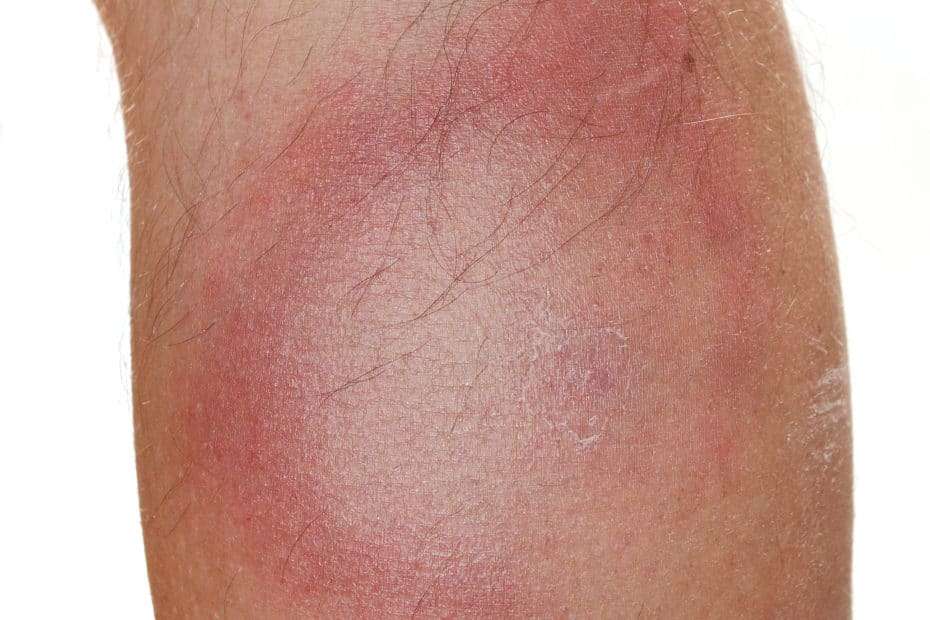 Late summer and early autumn is the peak season for Lyme disease. It is a tick-borne disease caused by the Borrelia bacterium. Symptoms manifest in the skin, nervous system and joints.

A lot of people are aware of this symptom. An expanding, round, red ring is a sign of Lyme disease on the skin, also known as erythema migrans. Especially if you’ve seen a tick in the middle of the ring a week earlier. Erythema migrans is treated with Penicillin VK (phenoxymethylpenicillin) for ten days.

Rash – not sure if the child has Lyme disease? Read our popular picture guide about spots and rashes in children here.

No rash? It can still be Lyme disease

That’s the problem. Only half of Lyme disease infections show up as rashes. The others don’t. So if you have seen a tick bite but no subsequent rash, unfortunately the danger is not over. If the child is doing well a month after the tick bite, then you can breathe a sigh of relief and feel more confident that the child has not contracted Lyme disease. But let’s be honest, who’s child is actually doing perfectly well, every day for a month? It’s natural to worry.

We can investigate whether a child has formed antibodies to Lyme disease via a blood test. We analyze two types of antibodies, IgM and IgG. IgM antibodies appear early in an infection and disappear, for most infections, within a few weeks. However, in the case of Lyme disease, they can persist for one year. IgG antibodies, on the other hand, will be present for the rest of your life. So if we find IgG antibodies, we don’t know if the infection has been cleared or if it is present. We also won’t know if the child has cleared an infection and also has a current one. IgM antibodies may be present even if the child has other diseases as well as Lyme disease. This method is not so accurate. In erythema migrans, antibodies are missing in half of the cases. It may take up to 6 weeks for a child with Lyme disease to start forming antibodies.

So, you’re right to think that the antibodies in the blood don’t really help us very much.

There is no point seeking medical care for tick bites for a symptom-free child! As a rule, blood tests don’t help.

Neuroborreliosis – Lyme disease of the brain and nerves

Lyme disease can spread to the brain. And to make it even worse, it can do so without first appearing as a rash, and without antibodies showing in the blood. An infection of the brain manifests itself with a combination or fever, headache and vomiting.

In the children’s emergency room, we perform a lumbar puncture to collect cerebrospinal fluid. Antibodies to Lyme disease in the cerebrospinal fluid are a sure sign of Lyme disease, unlike those in the blood. In addition, we can see if there are white blood cells or blood proteins in the cerebrospinal fluid as signs of infection of the brain and meninges. In Stockholm, we also always take TBE antibody samples of the blood of affected children. I believe you should do this throughout Sweden, even if you do not think there are any TBE-infected ticks in the area.

Fatigue and headache after tick bites

Symptoms of Lyme disease in the brain is not always clear. If the child becomes significantly more tired and often complains of headaches after a tick bite, it could be Lyme disease. Sometimes the child gets dizzy or finds it difficult to concentrate. Sometimes they don’t want to eat so much. Tired children with headaches often find it quite difficult to cope with being nice and accommodating. If your child suddenly finds it really hard to cope with everyday life and fights much more than usual, ask if their head hurts, or if the child feels tired. Seek a medical center or a children’s emergency room during the day. Attend the children’s emergency room early one weekday morning for a) the least waiting times and b) because it takes a few hours to prepare and conduct a lumbar puncture in children if necessary.

When a child has unilateral facial paralysis without other symptoms, it may be due to Lyme disease. The corner of the mouth hangs and the child sometimes has trouble closing their eye on the same side.

If your child has unilateral facial paralysis, seek the pediatric emergency room.

We will need to take a cerebrospinal fluid sample to see if it is due to Lyme disease in the nerves. If that is the case, we treat it with the same antibiotics, as we would with Lyme disease in the brain. In addition, if the child is unable to close their eye, an eye patch or shield is required for protection. This can be purchased without a prescription at the pharmacy.

Lyme disease can also cause swelling on the knees. The blood tests are very helpful in detecting swollen joints due to Lyme disease, as IgG antibodies always show up high. Lyme arthritis can cause symptoms for up to 6 months after the tick bite, or even for a year.

If you find that the child’s knee appears swollen, if the child has pain and difficulty bearing weight on the leg, seek the medical center.

If the swelling on the knee is due to Lyme arthritis, the child is given antibiotics, with or without pediatric consultation.

Swollen and red earlobe may be Lyme disease

If a child has swollen lymph nodes around the ear and neck and at the same time has a swollen and red earlobe, it is a sign of Lyme disease that should be treated with antibiotics.

What happens to my child in the future?

The rash always heals. But in rare cases the borrelia bacteria can still spread to the brain or joints and children need to be sampled and treated with more antibiotics.

There is, as yet, no vaccine against Lyme disease in humans. But if your child has had tick bites, consider vaccinating them against TBE. But of course, those of you who have followed my blog for a while, already know that the TBE vaccine is useful in preventing long-term difficulties caused by the virus.

TBE vaccine is mostly marketed in the spring. The idea is to get the first two vaccine injections at least one month before the summer tick season begins. However, there is no reason not to give it in the autumn, or winter, or summer. There will certainly be another summer to come, and this way the child is already vaccinated.

Tick bites in children – how to remove ticks, signs of Lyme disease and TBE

What to do when children refuse to take liquid medication or vomit when taking penicillin?

previousCradle cap – this is how you get rid of it
nextBabies sweat in hot weather – should you give them water?