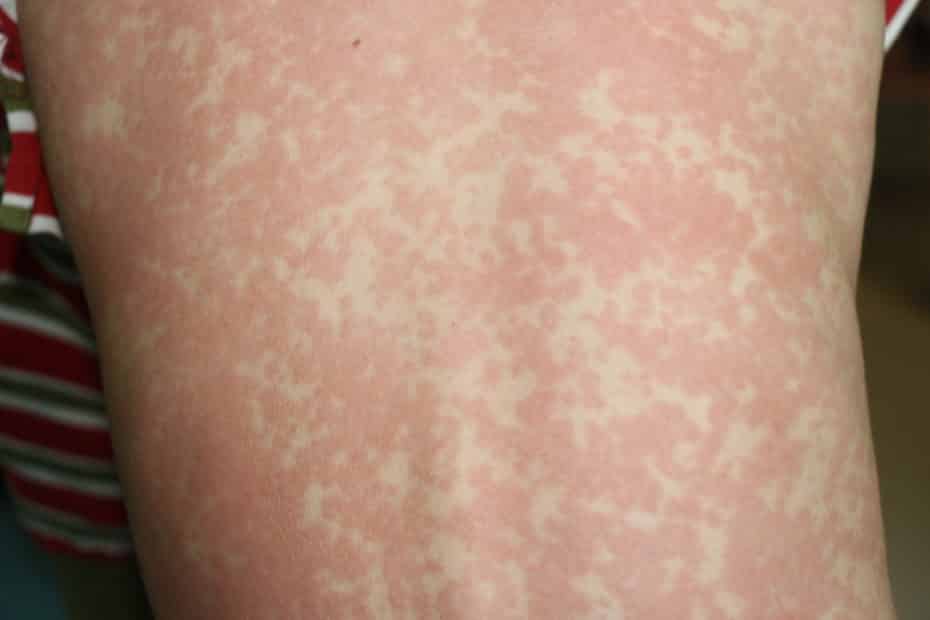 Facts and advice about measles. Written by pediatricians for parents. Measles is one of the world’s most contagious diseases. The disease is rare in Sweden, thanks to vaccinations. Measles was almost eradicated in several countries a few years ago, but because not everyone vaccinated against measles, it has spread again.

Fortunately, most of us are not susceptible to measles. In those born before the 1970s, this is usually due to the fact that they have had the disease. Once they’ve had it, the immune system forms an immunologic memory that protects them life-long against new disease. Of those born from the late 1970s onwards, most are vaccinated against measles, and therefore cannot become infected with the disease.

The measles virus is airborne and enters the body via the respiratory tract or eyes. A person who is susceptible to measles can become infected by just walking into a room where a measles sufferer has been staying for the last two hours. Even if the infected has left. It has been calculated that if a measles sufferer only meets susceptible people, each person infects an average of 15-18 other people. The incubation period is 10-21 days. You become infected and then for 10-21 days are ‘healthy’, before you show symptoms and can infect others.

The first symptoms of measles are mild fever, red eyes and dry cough. At this stage, transmission is at its highest. You can also then see grain-like rashes in the oral mucosa on the inside of the cheek, also known as Koplik’s spots. After 3-7 days, the fever rises and the typical spots appear on the skin.

Here’s a picture of Koplik’s spots

What should I do if I think my child has measles?

If you’re in Sweden, call Medical Information 1177 and tell them that you suspect the child has measles. Otherwise, seek a medical center. They’ll guide you in the right direction. They’ll probably contact, or provide contact details for, a children’s emergency room or infection emergency department where you may attend for examination, sampling and care.

It is important not to go into a hospital with a suspected measles-infected child yourself. If you go to the emergency room, let an adult enter and inform staff first so that staff can direct you through the right entrance to avoid further transmission.

If the child is very ill and needs hospital treatment, you will receive it, and there is no danger for vaccinated staff to care for your child, provided that the staff has received two doses of the vaccine. The important thing is that measles sufferers have their own isolation room where you do not risk infecting others.

In four out of five sick children, measles only lasts one to two weeks with fever, rash and sore eyes. However, one in five children have complications. Common complications include pneumonia, diarrhea and otitis that require antibiotic treatment or hospitalization a few days or longer.

One in 1,000 children suffer from acute measles infection in the brain, measles encephalitis. It is a disease that can both cause permanent brain damage and can lead to death.

A feared complication to measles is called Subacute Sclerosing Panencephalitis. This occurs five to thirty years after the measles disease, but usually around 10-12 years afterward. It means that the sufferer gradually loses brain function and dies. There is no cure. This complication has previously been perceived as extremely rare, but recent research suggests that about one in 1,300 sufferers will receive it. Among children who suffer from measles before the age of 12 months, the risk is even higher.

Although the vast majority of people who get measles survive, deaths can occur in countries with modern health care. About 1 in 500 infected die, and the risk is greater for infants.

Read about the mortality rate of measles in Europe

Globally and historically, measles has been one of the major child killers. Although more and more children survive thanks to vaccination, clean water and better food, 245 children a day die of measles in the world. All these deaths could be avoided if the whole world were vaccinated against measles.

Only people who have not had measles and are not vaccinated can get the disease if they encounter the virus. In addition, certain types of cancer treatment or other medical treatments that suppress the functions of the immune system, may erase a previous protection against measles.

Most people who are not vaccinated against measles are children under 18 months of age. The Swedish National Immunization Program provides the MMR vaccine at 18 months of age. You can get the vaccine earlier if you are going to a country with a measles epidemic. In several county councils you have to pay for the vaccine yourself if you want a vaccination before 12 months. In some counties you may also go to a vaccination agency to do so. If you vaccinate before 12 months then you need to vaccinate again at 18 months to ensure lasting protection.

Vaccination against measles started in Sweden during the 1970s. First, one dose of the vaccine, and then in 1982 with two doses. The second dose was introduced because one dose did not provide full protection in all vaccinated people. If you have not had measles and were born before 1981, it may be worthwhile having an extra dose as an adult, to ensure that you are fully protected. If you have not had measles and have not received a vaccine as a child, for example because your parents chose to abstain, it is a very good idea to have the two doses of vaccine. Go to a vaccination agency.

Traveling abroad with babies – advice about flights and vaccines