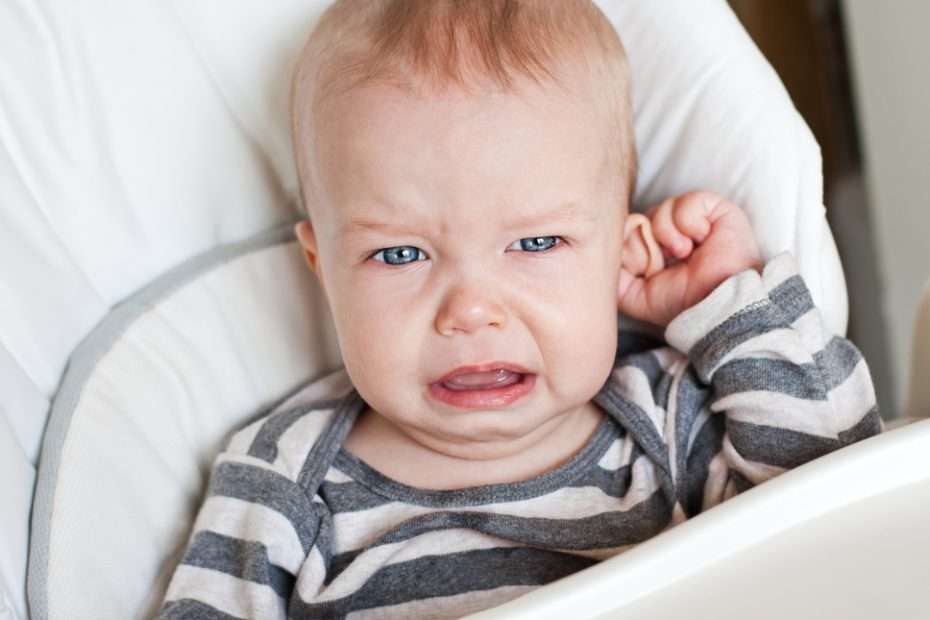 Facts and advice about otitis. Written by pediatricians for parents. Symptoms of otitis include whining, sore ear, fever and poor appetite. Most ear infections are self-limiting. But sometimes, antibiotics are needed. You can do a lot at home to help your child. Read more to find out what.

A baby, who can’t speak yet, can show that they have a sore ear by being extra whiny. Often all is well when you carry the baby around, but as soon as you put them down, the baby cries again. Some babies may even wave one arm at the side of their head. If you haven’t experienced this before, it can be difficult to link the pain.

Children with otitis often have a fever

It is common for children with otitis to have a fever. A typical symptom is also a fever that comes back after recovering from a cold.

The common cold and otitis

The common cold is a viral infection of the upper respiratory tract. It leads to swelling of the mucous membranes of the nose, mouth, ears and throat. The eustachian tube is the passageway between the middle ear and the throat. This is needed to drain fluid formed from the middle ear to the throat.

In the event of colds, the eustachian tube swells again. If there is bacteria in the middle ear, there is a risk that they will begin to grow and create an infection – bacterial otitis.

A CRP test never helps distinguish viruses from bacteria in otitis. CRP is often low even in bacterial ear infections and can be high in some viral infections. That is contrary to the basic rule that it is often higher in bacterial infections than viruses.

If a child has a sore ear and fever for more than 2-3 days, it is a good idea to go to the medical center and check if it is a bacterial otitis. When the child is in a lot of pain or really affected, see a medical professional on the same day. By waiting 2-3 days with healthy children, many viral infections in the eardrum and some bacterial otitis heal themselves.

Can you check if the child has otitis at home?

There are no safe home tests for otitis. Pressing the cartilage in front of the ear and seeing if it hurts is not a sure sign of otitis. The online doctor who claims to be able to diagnose otitis via videochat does not take his profession seriously.

Read more about acetaminophen and ibuprofen for children

When do I need to seek medical care?

If the child is well after using nasal drops, pain relief and seated upwards, you can safely stay at home and take care of the child. However, if the child has a chronic illness or takes medication that affects the immune system, follow the pediatric doctor’s advice.

If, after 2-3 days, the child still needs a full dose of pain relief, vomits occasionally, has a residual high fever, or really cannot sleep at night even in a raised position, then go to the health center when convenient. There, a doctor can inspect your child’s ear. If it looks like bacterial otitis, it may be appropriate to start antibiotic treatment (usually Penicillin VK).

The eardrum has ruptured – drainage from the ear

If the eardrum bursts and pus is draining from the ear, you usually give antibiotics. It’s not urgent, but go to the medical center the next day.

Meningitis – severe and rare complication of otitis If your child gets progressively worse after an ear infection, gets a headache, feels sick, becomes unclear and lethargic, then seek medical care urgently. It is rare for otitis to lead to meningitis, but it happens.

Does the ear need to be checked after a bout of otitis?

After 3 months, you should make sure the ears are checked at a health centre or a specialist, especially if the child has had otitis in both ears and hears badly. If there is fluid behind both eardrums, that does not go away by itself, the doctor may want to drain the eardrum.

If your child has repeated otitis, tiny tubes can be inserted into the eardrums. This reduces the number of otitis cases and makes it easier to treat using antibiotic ear drops, instead of liquid antibiotics by mouth. Go to the health centre and ask for a referral to your ear doctor if your child has more than three ear infections per year.

Read more about recurrent fever and infection in children

Ibuprofen and paracetamol in children – dosage for pain and fever

Colds in babies – snotty and stuffy nose – how to help?

Sore throat and colds in children

Penicillin or antibiotics in children

Lump on the neck, behind the ear, in the throat – lymph node or what?

previousRecurrent fever and infections in children – poor immune system?
nextGet started with breastfeeding – when does the milk come?