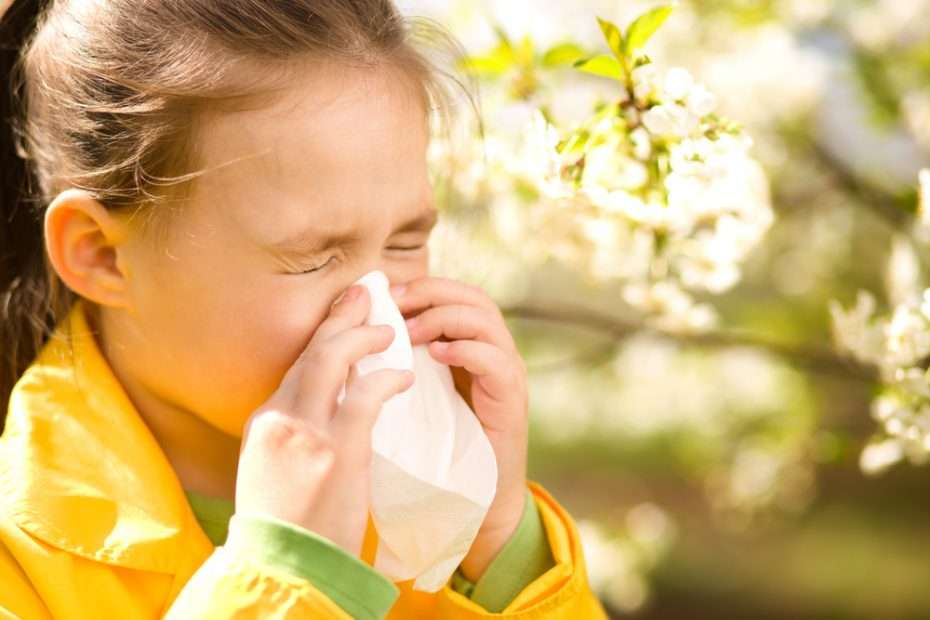 The pollen season begins with the spring when the weather begins to get warmer. The trees begin to bloom and releases pollen into the air. In Sweden, often alder trees and hazelnut trees bloom first in February. From March, the birch trees begin to pollinate. In April, willow and elm will arrive, while oak will not bloom until May.

Pollen allergy is due to an allergic reaction, an inflammation, where airborne pollen contacts the mucous membranes. Therefore, the symptoms generally occur in the eyes and in the respiratory tract.

The allergic conjunctivitis is an eye inflammation triggered by an allergen e.g. pollen and causes itchy, runny, sometimes red eyes. The symptoms always affect both eyes.

If the child has only one eye swollen, it is not allergic conjunctivitis. It could be caused by other things. It can be a mosquito bite (which requires no medical care) or sinusitis. But if the child has a clearly unilaterally swollen eye and you do not know about any bite or the causation – seek medical attention.

If both eyes are severely swollen without itching, and without other symptoms of pollen allergy – seek medical attention and have your child’s urine sampled. In rare cases, it can be caused by a general swelling throughout the body due to a kidney disease known as nephritis.

You can differentiate between a runny nose due to a cold and allergy because allergic symptoms appear more when you’re outside. Also, there are no signs of a sore throat nor fever. If you have a sore throat and fever, you are more likely to have a cold.

Cough and asthma due to pollen allergy

Asthma can be triggered by pollen allergy. It is uncommon in children under 6-7 years of age. However in school children, pollen allergies are a common cause of asthma.

The symptoms of asthma are shortness of breath and coughing. Children who become short of breath during exertion, or cough more than usual during the pollen season, should be examined for asthma. Seek your medical center for advice.

Read more about coughs in children

If you have a mild pollen allergy with symptoms in the eyes and nose during the pollen season, allergy tests are not necessary. You can trial medicines for allergies (anti-histamines). If they work, you do not need to do anything further.

If it is unclear, or if you have asthma, seek medical advice for allergy tests. Then you can either take a skin prick test against birch and timothy grass or you can take blood samples for IgE against the them.

The first choice for pollen allergy is a tablet or liquid medicine with antihistamine. There are several brands that work well. Many anti-histamines are over-the-counter, so ask your pharmacist for advice.

If the antihistamine does not give sufficient effect, you need to add topical treatment. Eye drops with sodium cromoglycate are also available without a prescription and can be combined with antihistamines. They should be given regularly and you should start as early as possible during the pollen season.

For the runny nose and sneezing, the next step is a nasal spray. The most effective over-the-counter nasal spray is cortisone, e.g. Nasonex. It must also be given regularly for several weeks to take effect, and it is a good idea to start before the pollen season starts. It does not give an immediate effect.

Read more about cortisone for children – is it dangerous?

If over-the-counter medications do not help, or if your child has asthma symptoms, seek medical attention. There are good prescription medications for pollen allergy, and it is important to treat asthma well.

Medicine for pollen allergy and asthma

In pollen-triggered asthma, it is important to treat asthma well during the pollen season. To cure the allergic inflammation in the lungs, inhaled steroids, or cortisone sprays, are best. They should be given throughout the pollen season in such a dose that the child does not become short of breath or cough too much. Inhaled steroids are available in several different brands: Advair, Breo Ellipta, Qvar, Pulmicort, Symbicort are common brands.

If the inhaled steroids do not help, you may need to add other asthma medications. Montelukast is an anti-inflammatory tablet to be taken daily to treat asthma in children.

To treat an asthma attack, you also need dialator or reliever asthma sprays such as Ventolin (blue spray).

When a child who is allergic to pollen does not come across pollen, the child is symptom-free. Therefore, in theory, it is a good idea to minimize the possibility of encountering pollen. But of course, pollen is found outdoors and in the air. Preventing children from being outdoors poses greater harm to the children’s health than pollen allergy (except children with very, very severe asthma despite medication). You can try to avoiding pollen by not drying sheets outdoors during the pollen season. Do not avoid being outdoors unless your child has a difficult-to-treat asthma problem. The cure must not be worse than the problem! However, it might help to shower and change clothes after bring outdoors when pollen levels are high.

Cortisone in children – is it dangerous

previousAsthma in children – Symptoms and Treatments
nextHaving a baby after infertility