Hem Rashes and red spots on children – a visual guide

Rashes and red spots on children – a visual guide 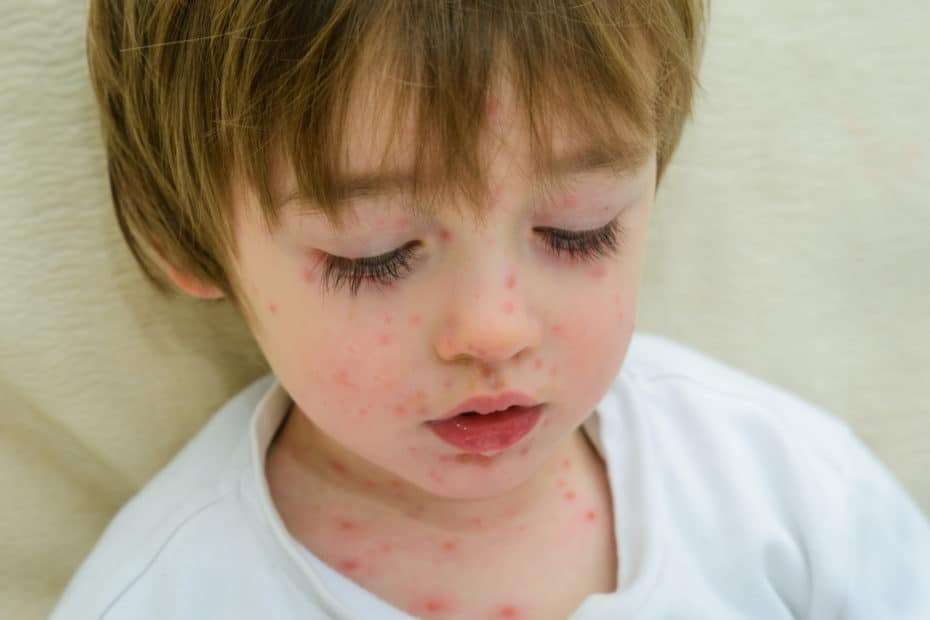 Facts and advice about rashes and red spots on children. Written by and pictures directly from pediatricians. When your child gets a rash or red spots, naturally, you will wonder why. As a pediatrician, I can sometimes recognize a rash in seconds. Other times I scratch my head, ask colleagues and dermatologists before I know what the rash is. Here you will find out how you can recognize different rashes, what viral spots are and what to do.

Is the child sick or is it just spots?

Many rashes can be recognized by color and shape. Are they blisters? Dry rashes? or Exuding rashes with yellowish crusts? Do they look like mosquito bites? Little red dots? Or like the child has burnt themselves on stinging nettles?

Feel the rash with your fingertips. Do they feel elevated? Course bumps? Hard bumps under the subcutaneous skin? Is the skin very dry? Can you feel it at all?

Chickenpox presents as rashes consisting of blisters with clear contents eg. vesicles, and are often red at the base. They can sit one by one on the body and can be a few or very many. Chickenpox itches a lot. Generally, you have a fever the day before or on the first days of the disease.

Read more about chickenpox in children

If the child has had chickenpox, the chickenpox virus lays dormant in the nerve cells. The immune system often keeps it in check throughout childhood. However, the virus may be reactivated. When this happens, it presents as blisters of the same type as chickenpox, but sit along a band of the skin and on one side of the body. The reactivated virus travels along a particular nerve pathway to your skin and thus produces the distinctive band shape.

If a child gets shingles on their face, go to the medical center or to an ophthalmologist. Antiviral medication may be required if the rash is near the eye.

Impetigo is a bacterial infection of the skin. They often sit around the mouth or under the nose, but can be found anywhere on the body. The skin around the impetigo blisters are red, inflamed and weep. The fluid solidifies into a honey-yellow crust and they can hurt quite a bit.

Sometimes children get a rash that look like they have been burnt by stinging nettles, without having been near any. They are white and raised in the middle, irregular in shape and red all around. The rash moves around the body and itches terribly.

Hives most commonly appear spontaneously. The second common reason is that they are associated to an infection. Hives can also be a reaction to the heat or cold.

And sometimes the hives are due to an acute allergic reaction. Sometimes hives only affect the skin. For example, when a child who is allergic to milk, tastes milk-containing porridge, rashes may appear around the mouth. If the child is doing well, you can take a photo, wait and seek medical advice when convenient to see if there is an allergy.

If, on the other hand, the child appears anxious, vomits, or has difficulty breathing, seek emergency medical care immediately. Call an ambulance, if necessary. Hives can be part of a severe acute allergic reaction which needs to be treated in hospital.

Read more about eczema in children

Scarlet fever rash is red, spreads all over the body, and feels like sandpaper. It always appears in conjunction with a fever. Scarlet fever is due to a streptococcal infection. If you have the bacteria in the throat, you have strep throat. Scarlet fever should be treated with penicillin, so seek medical attention if you suspect scarlet fever.

Lyme disease in children is an infectious disease caused by the borrelia bacteria spread by tick bites. It is ring-shaped and not raised. You can sometimes have several ring-shaped rashes from a single tick bite and you may not always have seen the tick.

Lyme disease should be treated with penicillin, so seek a medical center if you suspect Lyme disease.

Many viral diseases – colds – in children can cause nonspecific spots. Often they are small, red spots that can itch a little but not so much. Viral spots heal with the cold.

Three-day fever is a very common viral infection in babies and young children. They get three days of high fever without other symptoms and after the three days, a fine-spotted rash all over the body. Children are otherwise well and recover quickly. Three-day fever does not need to be treated or controlled in any particular way.

Infants often get hormonal spots or newborn rash during the first month. They look a lot like little pimples and are completely harmless.

During the summer, most children have mosquito bites. The mosquitoes usually sting in the evening or night and the bites itch and swell. Sometimes the bites can get really big.

Fifth Disease is a viral infection involving a virus called Parvovirus B19. It is usually harmless to the child affected but often causes fever and rash. The rash presents as wreath-shaped or laced pattern over the trunk and as very red cheeks characteristically known as ‘slapped cheek’.

Parvovirus B19 may in rare cases transiently affect the bone marrow (the tissue which produces blood cells). As a result, children produce less blood cells for some time, but this usually sorts itself out. However if your child seems extra pale, or has a little bit of bleeding under the skin, you should absolutely seek medical care. This is when blood cells will be monitored with regular blood tests.

If a pregnant woman has not previously had Fifth Disease and is exposed to the infection during pregnancy, it can be dangerous for her expectant fetus if she becomes ill. If you are pregnant and worried about being exposed to Fifth Disease, contact your midwife for advice.

Small, pinhead-sized, dark, red spots that do not disappear when pressed, may be small bleeding under the skin – petechiae. Petechiae can present on the face and neck after vomiting or severe constipation.

If the spots spread elsewhere on the body, or without signs of vomiting, the child needs to have their blood count checked, especially the platelet count (thrombocytes). Platelets play an important role in the clotting cascade that prevents bleeding. Seek medical advice on the same day for a blood test.

The most common cause of low platelet count (thrombocytopenia) is ITP, idiopathic thrombocytopene purpura. This simply means that one does not know why the child is getting this. Children with ITP are otherwise healthy and fit with the treatments available.

If the child has petechiae and at the same time seems sick, you need to admit them to the emergency ward, preferably by ambulance, even if it is at night. Some severe types of septicemia and meningitis can cause severe bleeding under the skin during the night. This must be treated immediately with intensive care and antibiotics. They often cause a fever, but not always. Children with septicemia or meningitis are always tired, dull and can sometimes be difficult to talk to, or they can complain of a headache or pain in the neck. This disease has a rapid onset and children can deteriorate by the hour.

Spots on children are often due to an infection or inflammation such as in eczema or hives. But most importantly, (as usual) it is dependent on how the child is feeling.

Blisters in the mouth in children

Babies with scabs – you’ll get rid of it