Hem Bronchiolitis (and RSV) in children and babies – symptoms and transmission

Bronchiolitis (and RSV) in children and babies – symptoms and transmission 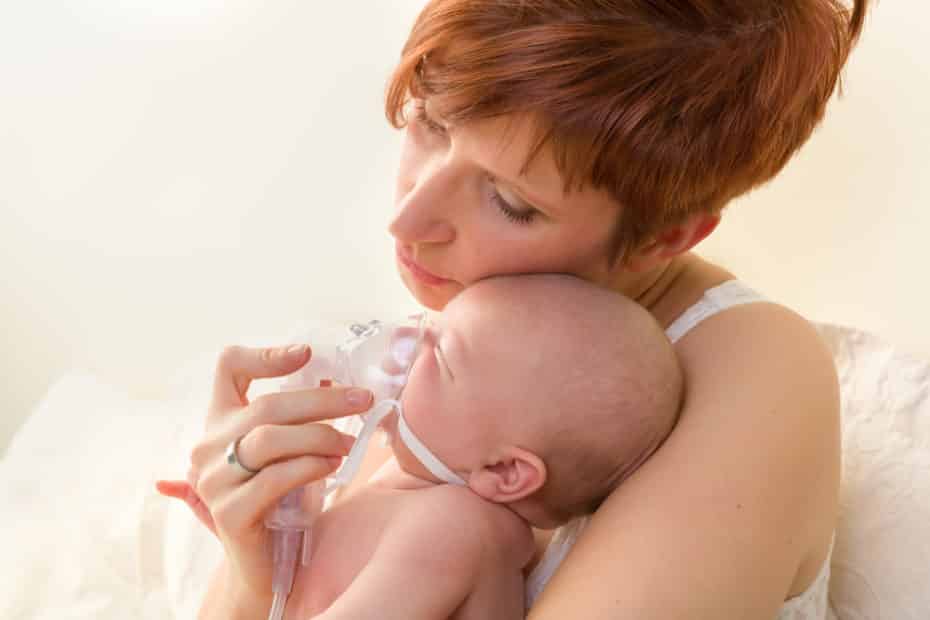 Facts and advice about bronchiolitis (and RS virus) in babies. This blog is written by pediatricians for parents. Every winter RSV returns, and parents don’t know what to think. What are the symptoms of bronchiolitis? Do you need to seek medical care for a sniffling newborn in case of RSV? Can siblings go to kindergarten? Can a mother’s cold infect their child?

Bronchiolitis is a viral infection which produces unusually thick mucus. It is commonly caused by the respiratory syncytial virus (RSV). All children contract RSV before they turn three years old. After having bronchiolitis, you have a certain immunity or protection against a new RSV infection. In about 1 in 100 children, especially infants, the thick mucus will provide so much breathing problems that they will need to go into hospital. Most babies can ‘fight off’ their bronchiolitis themselves. The older they are, the better they are at ‘fighting off’ the infection. The disease gets worse and worse in the first five days and then slowly improves.

Difficulty eating or breathing with bronchiolitis

The two situations where bronchiolitis leads to hospital treatment are, if the baby is experiencing difficulty eating, or difficulty breathing. Both symptoms are due the mucus clogging the babies’ small airways. At home, you can relieve this by flushing their nose with saline. If your baby can eat and breathe without straining, you can stay at home and continue clearing their nasal passages with saline.

Read more about saline and colds in babies

Hospitalization for severe bronchiolitis in babies

In hospitals or home care, babies are fed via a tube called nasogastric tube. The tube delivers food and medications through the nose and into the stomach . Their breathing is assisted by inhalers. You can also assist your baby’s breathing by holding them in your arms and bouncing on a large Pilates ball.

In a few children, nasogastric feeding, inhalers and bouncing are not enough. Instead, they may need High Flow Oxygen Therapy (HFOT) or Continuous Positive Airway Pressure (CPAP). In isolated cases, children may also need respiratory treatment for a few days. Of those children, many have risk factors for a severe illness, such as premature birth, heart failure or lung disease.

Children at risk of severe bronchiolitis

Some children are at risk of RSV causing more life-threatening bronchiolitis. These children include very premature babies (before week 26 and who are under 6 months); children with severe heart disease; severe lung diseases; brain diseases that prevent them from coughing properly; or have impaired respiratory function. The same applies to babies with severe, rare immunodeficiency disorders.

If your child belongs to one of these groups, it may be appropriate to give Synagis (palivizumab) for prevention against a severe RSV infection. The child receives the medication as an injection once a month, during the RSV season. The medication is expensive, and only children belonging to a risk group receive this. If you have any questions, please contact your child’s doctor. Synagis reduces the risk of hospitalization for RSV by about 50%.

RSV are found in masses in saliva and snot. It is spread through direct contact. For example, let’s say you’re carrying your baby, you cough/sneeze into your hand and suddenly your baby is sucking on your thumb. The RS virus will have traveled from your sneeze, to your hand, and finally to your baby. Coughing and sneezing contains millions of microscopic saliva drops that all contain RSV. Anyone within 1-2 meters of a sneeze can be infected.

The important thing is to avoid direct contact with a sick person. That’s easier for adults to adhere to. But with older siblings, it’s much harder. You can only do your best.

Here are some useful ground rules:

There is a lot of advice about avoiding public transport, crowds, cafes and public places. Assess for yourself. Is there is a high risk of someone coughing or sneezing within one meter of the child? If there is a high risk, consider choosing another means of transport or activity. But as I said, RSV is not hanging in the air unless someone sneezes or coughs. So in an uncrowded bus, cafe or library, the risk of infection is small.

Should you keep older siblings at home from kindergarten to protect the baby from RSV?

A newborn is less likely to be infected with RSV or other cold viruses if their older siblings do not go to kindergarten. But, let’s consider the older sibling. It is often hard enough for a 2-3 year old to have a new member in the family. It would be devastating for them to be expelled from friends at preschool as well!

As long as your baby is not particularly susceptible to infection (for example they are not extremely premature, or have non-operated severe heart defects, etc.), I would recommend letting the older sibling go to preschool. Colds, and even bronchiolitis, are a part of life. However, it is understandable that the overall situation in the family is important. So, if you feel better about having all children at home, then do it.

Who should be protected against RSV?

Try to protect babies under three months, as much as you can. Premature children require care at neonatal wards until they are at least 6 months. Children with severe heart and lung diseases or immune deficiencies require a longer time, but talk to their doctor for individual advice.

Who should not be protected against RSV?

When a healthy child starts preschool after the age of one, infections will come. At this age though, the risk of serious bronchiolitis, that require hospitalization, is very low. When a younger sibling turns 6 months, their older siblings can touch the baby after washing their hands, even if their older sibling has a cold.

Every year during the winter season, you can read weekly reports on how prevalent RSV is in society.

Read more about the RS virus weekly report in Sweden

How to get rid of cradle cap

previousWorried about your children? – What to do as a anxious parent
nextCough in children – a guide to diseases and home remedies