Hem Taste food portions – when and how to introduce food?

Taste food portions – when and how to introduce food? 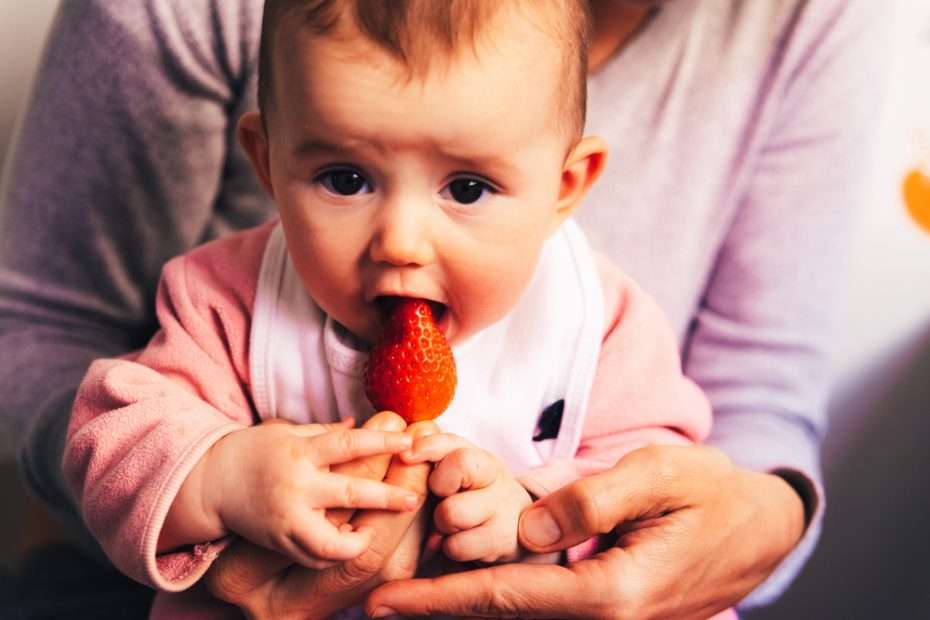 Facts and advice about taste portions. Written by pediatricians for parents. Taste portions of food are usually given to babies at 3, 4 or maybe 5 months of age. The introduction of food to babies has varied over time. What about salt? Should babies avoid it? And beetroot, green leafy vegetables, honey?

Give yourself the food you need, when you need to!

If you have not previously prioritized your need for food, you should start to do so when you have children. I’m sure you know this already but I’ll reiterate. You should be eating breakfast, snack, lunch, snack, dinner at fairly fixed times. In a meal, half should be vegetables/fruit, a quarter protein, a quarter carbohydrates and some healthy fat. Or something similar to that. If you’re not used to cooking, a pre-composed grocery bag with recipes is convenient and a good way to learn.

Read about healthy foods for babies

If it suits you, let your child sit with you at the table as you eat. My kids liked to sit on my lap at the dining table. When they can sit steady, they can sit in their own chair if they want to.

At three to four months of age, children begin to be able to bring their hand to their mouths more purposefully than before. They then also begin to become more interested in things around them. Some children begin to show interest in foods that others in the family eat as adults. Then they can start to try their own chosen flavor portions. Others wait until over the age of one before they are interested. Most children have started eating food other than mother’s milk/formula at 7-8 months of age. Let the child taste what the child is interested in, when the child shows interest!

At what age should you start giving taste portions?

The advice on the time at which babies should get taste portions has varied for the last fifty years. For a long time it was four months. In the 90’s the idea of 6 months of full time breastfeeding came about. It was then recommended not to give anything except breast milk and vitamin D drops for 6 months. A couple of years ago, the National Food Administration changed its mind and started recommending tiny portions of flavor from four months. None of the recommendations have been based on strong research results.

Over the past two years, researchers have published two large well-made research studies to try to clarify whether giving taste portions early can protect against allergy development. In one study, the researchers randomized children to either get flavor portions of peanut, eggs and four other foods from 3 months, or from 6 months. It turned out that children who were introduced peanut and eggs early on, had very few allergy to these foods.

But only half of the families involved in the study, managed to introduce foods according to the study protocol. It has led to discussions about whether it was really the food introduction that was protective, or whether it was the case that families at high risk of allergy development did not follow the protocol and therefore those who followed the protocol did not get allergies later. The study failed to provide a clear answer on when to start with foods that many people are allergic to. However, the results do not support advising to wait until 6 months before giving anything other than milk.

In another study, children at high risk of peanut allergy were randomly randomized to either eat peanut early or avoid peanut until the age of five. The children in that study were between 4 and 11 months old. The study showed a strong protective effect for eating peanuts compared to avoiding it.

There is a myth that babies’ kidneys cannot tolerate salt. That’s not true. Babies need salt just like the rest of us. The National Food Administration now says that it is unnecessary to accustom children to overly salty food. Sure, but if your baby wants to taste a chip or an olive, then it’s fine.

The Swedish National Food Administration also states that children under the age of one should not eat beetroot or green leafy vegetables because they are nitrate-rich. What can happen is that their hemoglobin molecules in the red blood cells cannot bind to oxygen. Dangerous: yes! But the risk is only increased for children under 3-4 months of age. The American Society of Pediatrics recommends that children under three months of age should not receive homemade baby food based on beetroot or green leafy vegetables. At the same time, they note that children under 4-6 months of age are not recommended any food other than breast milk/ formula… I completely agree with the advice of my American colleagues. If you intend to give your baby, who is under three months of age, homemade soup or puree, then do not give the baby spinach soup or beetroot puree! Especially not food that’s cooked several days ago.

Honey contains spores of the bacterium Clostridium botulinum which in the child’s intestine can grow and produce a very dangerous neurotoxin. Children older than one year and adults have an environment in the gastrointestinal tract that kills the spores and is thus not sensitive. Do not give honey to children under the age of one, nor eat honey when the child is watching. It is not nice to eat something good and do not invite others.

When children want to eat a little more

Some children love food right away and are rapidly increasing the amount they want. At the same rate, they reduce breastfeeding/bottle feeding. Some children take it more cautiously and poke at the food for a long time. Many of those children also continue to be breastfed or bottle fed for a long time. As long as the child grows well and they get enough nutrients, then the combination of milk/formula/food is highly personal.

Some kids like puree. If that’s your child, then ready-made baby food cans are very convenient. They are nutritionally calculated and well balanced. If you are really comfortable, you can try to serve the baby room temperature canned food. If the child likes it, there’s nothing wrong with that!

Other children do not like puree but prefer to be able to hold the food and suck on it or mash it in their mouth. Those children usually do not eat larger amounts until they get teeth, for natural reasons.

Read more about how to stop breastfeeding

Extra fat on the baby’s food!

A baby needs a little more high-fat food than you, so add a teaspoon of oil that you like (rapeseed oil or olive oil for example) to the baby’s flavor portions. If the baby eats larger amounts than just taste portions, the proportions of one third vegetables, one third protein and one third carbohydrates with extra added fat can be a good benchmark.

It’s fun to eat when you get to eat things you like. So serve things both you and your baby like.

If you are lucky enough that your baby likes different kinds of food, please give iron-rich food, like red meat, a few times a week or every day as flavor portions. If you do not want to give your child meat, give lentils / beans in a meal and dried fruit in a meal and introduce iron-enriched porridge after 6-7 months of age. Another option is to continue with iron-enriched porridge.

No theater at the dining table!

Many first children become the Main Character with a capital C at the dining table when it’s time for their food. It tends to be hard for them and soon they discover that the parents have all their focus on them to eat. If they love to be sung to and mischievous with, they will soon realize that they can get parents to sing and play fantastically funny scenes at the dining table as long as they eat a little sometimes. Don’t fall into the trap! It becomes exhaustively hard and is also ineffective. Let the baby eat what the baby wants. If the baby wants to be fed then set it up. Otherwise the baby can pick up what they want to eat while you eat.

Babies who don’t eat can create so much anxiety in parents that parents start force-feeding them. It exacerbates an already bad food situation very quickly. If the baby does not want to start tasting any food at 8-9 months of age and you as a parent start to find it hard, talk to your midwife, nurse or doctor. They are very good at the whole ‘food thing’. Make sure you have a wise and caring nurse who can support you when needed.

How long you should breastfeed for?

How to stop breastfeeding

previousMilk protein allergy in babies and milk-free infant formula
nextHow to stop breastfeeding – when is the right time?