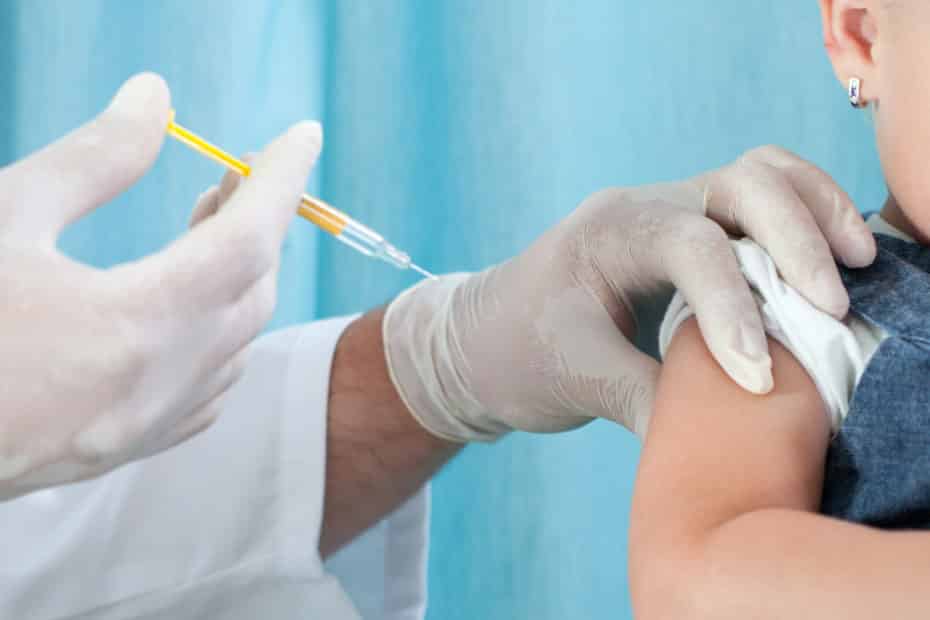 The vaccine against measles, mumps and rubella, also known as MMR vaccine or triple vaccine, has been in place since the 1970s. It has been a part of the Swedish National Immunization Program since 1980 and those born from 1981 and followed the program should have received two doses of vaccine. The vaccine is sometimes referred to as the 18-month vaccine as children receive it at 18 months of age.

MMR vaccine is a live vaccine

Side effects of MMR vaccine

However, the vaccine viruses can produce a small bout of mini-measles, mini-mumps or mini-rubella in those vaccinated, one to three weeks after the vaccination. Side effects may include some fever, rash, joint pain or swollen lymph nodes.

In isolated cases, children have contracted meningitis after the MMR vaccination. However, it is not clear whether the vaccine virus was the cause. Fewer than one out of a million vaccinated have meningitis. Compared to those who contract the measles disease, one in a thousand children get meningitis which is probably due to the measles.

Children who have a severely compromised immune system, such as those born with severe congenital immune deficiencies (SCID) or have ongoing chemotherapy for cancer, may experience stronger disease symptoms from the vaccine viruses. Because of their weaker immune system, they must not be vaccinated with the MMR vaccines.

A long-lived myth tells the tale of a link between autism and the MMR vaccine. But there is no such thing. The myth originated in a case of research fraud from the late 1990s and has been refuted in several large studies.

Effect of the MMR vaccine

In the first weeks after the vaccination, the child’s immune system works to provide protection against all three vaccine viruses. Approximately 90% of all vaccinated people receive protection from the first dose of vaccine (often 18-month vaccine). For the whole population to gain protection, an additional dose is required. Also, the long-term effect is improved with two doses of vaccine. Therefore it is recommended to give two doses to everyone.

The MMR vaccine is very effective in protecting a population against measles. In Sweden, where more than 95% of all children have been vaccinated since the 1980s, no measles outbreaks have grown large since then.

Population protection depends on something called herd immunity. Herd immunity means that when enough people are vaccinated, it becomes difficult for a virus to find a susceptible human being to spread the disease. This means that the epidemic will soon die out. When measles is spread in Sweden, more than 20-30 people usually contract the disease before the infection dies out.

In countries that have had vaccination coverage of less than 90% for a long time, the situation is quite different. There, thousands of people get measles every time the infection enters the country.

Read more about how vaccinations work? Herd immunity and the spread of infections

When do children receive a vaccine against measles, mumps and rubella?

In the Swedish National Immunization Program, the first dose of MMR vaccine is at 18 months of age, hence the name 18-month vaccine. This means that all children under the age of 18 months are unprotected against measles.

As long as there is no measles outbreak, it does not matter, herd immunity protects the babies. However, in the event of a measles outbreak, or when travelling to a country with measles, younger children also need protection.

It is recommended that children over nine months of age receive the MMR vaccine before traveling to endemic areas. If you are planning a trip abroad before the age of 18 months, ask your doctor for an dose of MMR vaccine.

A doctor may prescribe MMR vaccine outside of the approved indication, that is, from ages below 9 months. In case of significant risk of infection, children from 6 months should receive an MMR vaccine. During 6 months of age, the vaccine has a very poor effect. Therefore we very rarely vaccinate such young children.

The second dose of vaccine is given to children according to Sweden’s School-based Immunization Program at the age of 6-8 years.

Who is at risk of not having protection against measles?

All children under 18 months of age who have not received vaccines.

Anyone who has undergone chemotherapy and has not been revaccinated afterwards (chemotherapy treatments may erase previous vaccine protection).

Anyone who was born before 1981 and did not have measles as a child. This is mainly true for those born in the 70s, because virtually everyone in previous generations had measles as children. They are at greatest risk because they only received one dose of the MMR vaccine. So those born 1970-1974 may have weak measles protection.

People with severe immune deficiencies who have not been able to obtain MMR vaccine.

People whose parents have declined the vaccines in the Swedish National Immunization Program.

Read more about what’s in a vaccine

What should I do if I don’t have safe protection against measles?

If you are not sure if you have protection against measles, then vaccinate yourself with the MMR vaccine. If you are sure you have received a dose, take one more dose at any time. If you know you’ve received zero doses, you’ll need two doses, at least four weeks apart.

If you work in the health care sector, vaccination should be free of charge via the Occupational Healthcare. If you do not, you may need to go to a vaccination agency and pay for the vaccination yourself.