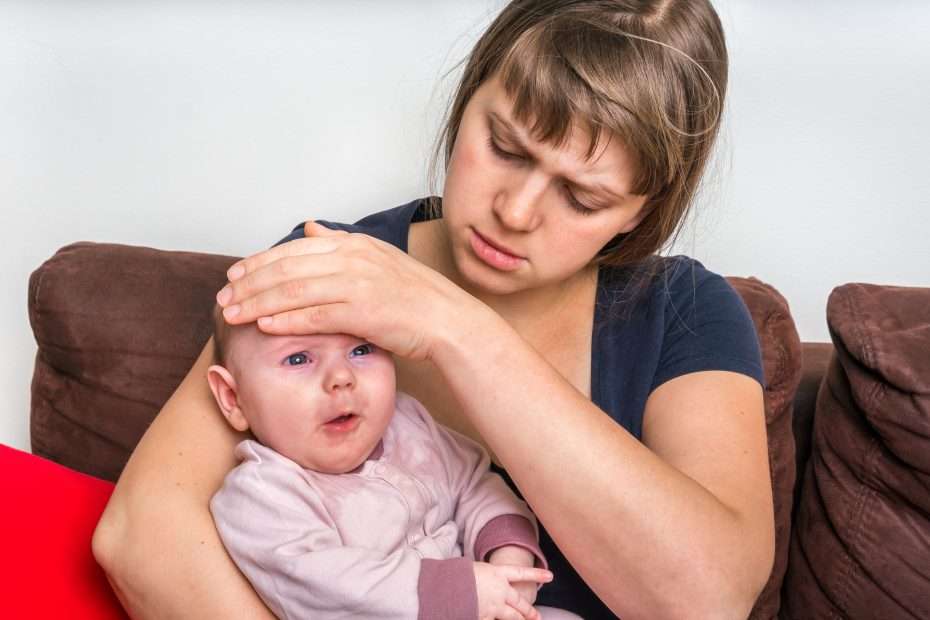 Urinary tract infection (often referred to as UTI) is common in babies and in older children. UTI with a fever, or pelvic inflammatory disease, can become dangerous and needs to be treated quickly with antibiotics. UTI without fever, also known as cystitis, is very unpleasant but not dangerous. Antibiotics can also help there.

Urinary tract infections are quite common in children under one, and especially in boys. Most children with UTI under the age of two, get a high fever (over 38.5C or 101.3F) without any other symptoms. Their urine doesn’t smell bad, they are not bothered by their genitals and they often eat (but not always) well. The only thing that makes us suspect that they have a UTI is that they have a fever without other symptoms.

Infants may also have UTIs without a fever. In this case, they are not eating, nor gaining weight. Then it’s always good to take a urine sample.

If a UTI is suspected in young children, a urine sample is needed. Unfortunately, sanitary pads and bags give rise to unclean tests where UTIs are diagnosed by mistake. So, as a rule, pee in a mug. You simply have to sit with the child on your lap and position the mug until they pee.

If the sample shows signs of UTI, it needs to be confirmed. Pediatricians collect a sample by inserting a needle through the skin of the lower abdomen into your child’s bladder. It’s fast, but it hurts a little. The advantage is eliminating the possibility of making a false UTI diagnosis. The risk with peeing in a cup is that the urine can be contaminated on the way out.

In children over two years of age, there are 3 types of UTIs: cystitis, pelvic inflammatory disease (PID) and asymptomatic bacteriuria (ABU). In younger children, it’s similar. Partly because they cannot describe their symptoms, and partly because everyone is treated the same.

The symptoms of cystitis are: burning or pain upon urination and a need to go to the toilet often to urinate.   Importantly, the child doesn’t have a fever. Leave a urine sample to be sent for cultivation. Antibiotics help.

Blood in the urine

Renal pelvic inflammatory disease, or pyelonephritis, is a urinary tract infection in which bacteria grow in the kidneys. It is noticeable in children over two years of age and often referred to as fever without other symptoms. Sometimes children complain of stomach or back pain. Other times it hurts to pee. Sometimes the pee smells bad. Or sometimes children throw up (often not).

Pelvic inflammatory disease in children needs to be treated with antibiotics and should be followed up with an investigation into the urinary tract.

Asymptomatic bacteriuria means bacteria in the urine without symptoms. That’s not quite right. This is most common in girls and presents as smelly urine. Really smelly urine. They often pee on themselves. But it doesn’t sting when they pee.

Previously, girls with asymptomatic bacteriuria were treated aggressively by the health care system. They were given bactericidal agents directly into the bladder time and time again. Both doctors and former patients described the ordeal as terribly tormenting. Thankfully, scientists investigated its efficacy and found that it didn’t help.

Unfortunately, antibiotics don’t help either. It does remove the smell from the urine while you’re taking it, but the smell and bacteria come back after antibiotic cessation. Antibiotics also do not protect against pyelonephritis in children with ABU. On the contrary, actually. The child has a bacterial strain in the bladder that they are able to keep away from the kidneys. If you kill that bacteria with antibiotics, there is a risk that the next bacteria crawling up through the urethra is more aggressive. One which the child is unable to hold from the kidneys.

Antibiotics for children with ABU do more harm than good!

Children with asymptomatic bacteriuria need to see a urotherapist or Urologist for specialist treatment. They need to examine whether the child empties their bladder when they urinate; whether they have an overactive bladder; or in most cases, whether they urinate too rarely and have an overcrowded bladder. Children need assistance urinating regularly (every three hours). This may help, but unfortunately, it doesn’t always.

Read about incontinence and building good habits in children here

Children over two years with cystitis, pyelonephritis or ABU often have constipation. It should be treated. Ensure adequate treatment for constipation if your child has hard stools and is not going to the toilet as usual. Constipation results in a stretched intestine which can impede the bladder. This makes bladder control and bladder emptying more difficult. In turn, this increases the risk of urinary tract infections.

Constipation in children –   symptoms and treatment

previousBottle feeding your newborn baby formula – how much do you give? And how often?
nextDiaper rash, fungal infections and a red baby bum